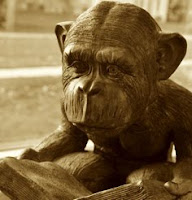 *NOTE* - In the interest of exhibiting some form of blog honesty (oxymoron? perhaps), some of the following review has been cribbed from a blurb letter I wrote to accompany the release of Mark Rayner's novel. Nevertheless, I meant every word then, and I mean it now. I'm just a little lazy sometimes. If your opinion of me is lowered as a consequence, well, then, it couldn't have been very high anyway, right?

Marvellous Hairy
by Mark A. Rayner

Please allow me a moment to blow your mind:

Canada has no Douglas Adams.

I’ll give you a moment to process that. Done? Good. Now let us weep and gnash our teeth in despair.

Canadians are a damn funny people. I would not hesitate to proclaim that Canadians—as a sui generis species of timid, weather-beaten snow creatures—Canadians are some of the funniest people on the planet. Maybe it’s the harsh bleakness of Canadian winters. Or the oppressive smothering heat of Canadian summers Or all the free health care we have lying about. Maybe it’s our natural politeness, or something in the beer. Maybe it’s hockey. My money’s on hockey. No, beer. If I knew what the secret was, I’d bottle it and make a fortune.

Canadians are funny. Yet we have yet to produce an Adams, or a Terry Pratchett, or a Robert Rankin, Christopher Moore, or Tom Robbins. We have no true clown princes of prose. We have humourous writers, to be sure. Stephen Leacock, Trevor Cole, Miriam Toews, Douglas Coupland, Will Ferguson: Canadian literature does not lack for wit.

But with all that, where’s our Adams, Rankin, Moore et al? Where’s our cult author who mangles language with glee, who puns with ferocious focus, who bends and warps plotlines and traditional narratives to satisfy his craven tastes, who goes completely meta over the whole writing thing?

I don’t know. But I think Mark Rayner could be in the running.

The London, Ontario writer never met a joke he didn’t like, an event he couldn’t satirize. A man whose first novel The Amadeus Net was equal parts Adams, Monty Python, The Goon Show, and Red Dwarf, Rayner is nevertheless unique, a mélange of influences that results in something new and utterly tasty, if a bit odd.

All this is a method of saying that Rayner’s novel Marvellous Hairy is weird. Deeply, unsettlingly weird. It obeys few of the laws of literary physics. It weaves together gene-splicing, super-villainy, criminal plots, and ghosts. Rayner dances through subplots and asides with hectic abandon and a willingness to try anything once.

Marvellous Hairy is a weird little beast, a blending of the anything-for-a-laugh mentality of Adams with the experimental abandon of early Philip K. Dick. Is it satire? Science fiction? A piercing exploration into the nature of being? Good-natured sex romp? The publisher, Crossing Chaos, has labeled Marvellous Hairy as being “Fabulist Satire,” which is as good a way as any to say that categorizing Rayner's work is a near-hopeless task.

To give you a sense of the novel's strangeness, it begins with the narrator Rob, a computer nerd working for the bio-tech company Gargen (Gargantuan) Enterprises, attending a wedding presided by his friend Max. Max, or rather, Maximillian Tundra, is both a doctor and "an ordained minister in the Church of the Irredeemable Bong-Hit, or some equally questionable Internet sect." During the service, he releases a gaggle of macaque monkeys and a komodo dragon for reasons as obscure as they are innately funny.

As the plot deepens, we realize that Rob's work for Gargantuan on a weather satellite may not be, strictly speaking, a good thing for humanity. But there are many other sub-plots and characters to keep us distracted from what might otherwise be a comedic novel of the 'straight and narrow' variety. For instance, we meet:

Nicholas Motbot, a writer of surrealistic prose making ends meet by offering himself up as a test subject for experiments;

Ted Shute, the CEO of Gargantuan, who is being haunted by the ghost of;

Spider, a cold sore of a criminal, "a malignant heterosexual with festering relationship issues, and a complete inability to think in non-Euclidean terms";

Blossom, a bedraggled woman who thinks of Spider as "her 'boyfriend,' much in the same way we are starting to accept entertainment as 'news'";

and Spider's partner in crime Seedy, slightly smarter than Spider, blessed with "long greasy black hair that clung to his head like an octopus humping his skull, and then fell onto his shoulders in oily post-coital exhaustion."

And that's only about half of Rayner's characters, and hardly anything about his interweaving plotlines. Suffice to say, when Gargantuan begins altering Motbot's genetic makeup to see if "they could alter just 10 [genes] to see if they could make the alterations without killing the subject," things take a left at Albuquerque and go more manic thenceforth.

I can't say that Hairy is perfect (but then again, I can't say that about Douglas Adams' work either, much as it hurts me to write it). Rayner takes a scattergun approach to his satire, and the cohesiveness of his narrative suffers as a result. There are laughs aplenty, but too many ideas to shake some sort of idea-shaking device at.

But I'll take a novel that tries over one that doesn't any day. So, read Marvellous Hairy. I think you’ll enjoy it, if your tastes lean toward the spicy and unusual. If you enjoy it, great. If not, I’m sure Mark won’t take it personally. He’s got a pretty good sense of humour about himself.

And hey, if you want a chance for a free copy, and even better, a chance to have a character in a novel named after you, visit Rayner's blog. Better hurry up and enter, October 31, 2009 is the last day for this contest.

And this just in: a trailer! Enjoy!

I met Mark at Worldcon in Montreal at the bar. I spotted him the next day in the dealers' room and we chatted for a bit. He' just as funny in person as he is on paper. I bought his book and agree that it's plenty crazy and nicely weird. If you're willing to give in to the fast-and-loose narrative, it's a heck of a lot of fun. Good read! --Nick

I'll let him know of your response, I'm sure he'll be plenty thrilled.