An appreciation of Kenneth J. Harvey

If there's a current unsung (relatively) hero of Canadian literature more talented and deserving of vastly wider recognition than Kenneth J. Harvey, that individual must be truly depressed.

Harvey, a Canadian author fully deserving of joining the CanLit pantheon of greats - made up primarily of Atwood, Munro, Mowat, Findley, and Davies - will, if there is any justice, be discussed and dissected in university courses in the coming years. Harvey has continually been one of the strongest, most daring, and original writers in the country, and while he has achieved wider recognition on the world stage as of late (no less an icon than South African author and Nobel Prize-winner J.M. Coetzee raved about Harvey's novel The Town That Forgot How to Breathe), he is overdue for appreciation on a mass scale. I am not the individual to commence a deep exploration of his many themes, and this blog is not the place for a scholarly treatise, but I hope to serve to bring his work a tiny portion of the acclaim he richly deserves. 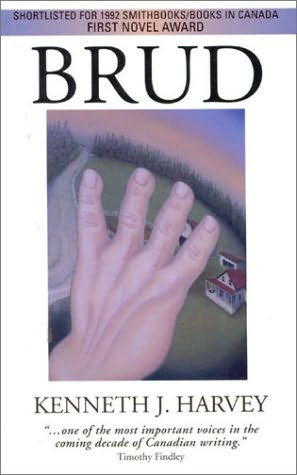 Harvey's first few efforts were strongly disturbing stories that may have served to hide his vast talent from public eyes. His debut, the short story collection Directions for an Opened Body, was an often unnerving and visceral collection which earned him comparisons to Canadian horror movie icon David Cronenberg. Harvey's first novel, the marvelously affecting Brud, was a strange, unsettling fable of a deformed innocent trapped in a judgmental urban setting. Both efforts, among many others, laid the groundwork for Harvey's unique blend of humanity with an almost grotestque view of the perils of modern life. As well, he began his explorations of society's outsiders, a common theme in his later works. He didn't completely abandon his penchant for gruesomeness, however; his visceral novel Skin Hound would make Chuck Palahniuk blush and look away.

But it's his last few works I'd like to highlight here, works that have served to elevate him in the public consciousness. While his pervious novels and collections had won him numerous awards, his last three novels have displayed not only a mastery of craft, but a vast breadth of vision and talent. As different from each other as they are from his earlier output, they show that Harvey may be Canada's answer to Joyce Carol Oates; an author unafraid to traverse genres in order to tell his stories. 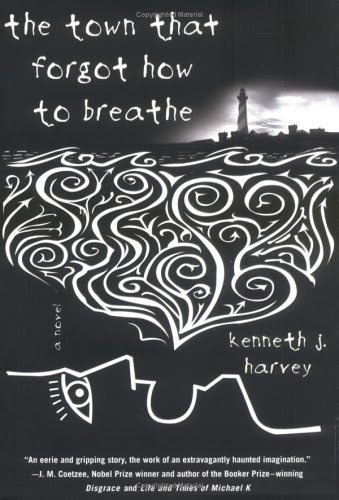 The Town That Forgot How to Breathe
While Town displays many of the storytelling traits that Harvey is known for (Newfoundland locale, strong characters), it differs from his output (to that time) in three main ways. First, Town is more expansive in its structure, allowing for more characters and events. Second, Town was Harvey's first main introduction to the U.S. market. Third, Town is dabbles with the realm of fantasy and magical realism, a genre relatively unexplored by Ha

rvey up to that point.
The Town That Forgot How to Breathe revolves around the strange going-ons in the Newfoundland town of Bareneed (often revisited by Harvey, a fictional burg that is fast becoming his Castle Rock). A newly-arrived fisheries officer soon notices that things are not quite as they seem; there are frequent sightings of people long-thought dead, citizens are passing away for no apparent reason, and the fish in nearby waters are displaying physical traits that are unusual in the extreme. Outwardly similar to the gothic themes of Canadian author Eric McCormack in his novel The Mysterium, Town quickly transforms itself from a traditional horror novel a la Stephen King to a more subdued but no less fantastic exploration of endangered Newfoundland traditions. Harvey has often revisited the theme of Newfoundland's perceived place in Canadian society, but his masterful interplay of political and social themes with elements of the fantastic combine to make Town one of his strongest novels, and certainly his eeriest. 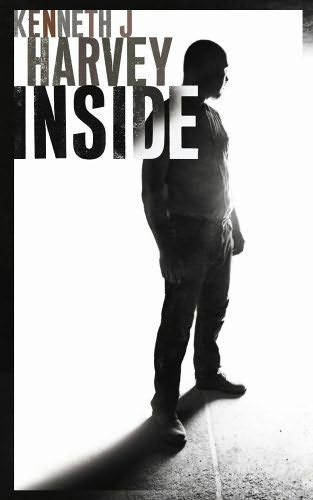 Inside
Inside, as opposed to the more overtly lush and gothic presentation of Town, is so sparse and spare it almost doesn't exist, a condition that perfectly mirrors its protagonist. Written in staccato sentences with nary a comma in sight, Inside is a devastatingly effective character study of a man who becomes the ultimate outsider.
Inside follows the travails of Myrden, a man released from prison after being unjustly incarcerated (although the exact nature of the crime and his involvement are always in doubt). Myrden, one would expect, should be joyous and free after his aquittal, but forced quarrantine from society can scar a person in ways no one could comprehend. As he shuffles and jerks his way back into life, he finds that his priorities have shifted, and he cannot become the man people expect him to be.
Harvey has lately had the term GritLit applied to his work, and nowhere is that label more effectively portrayed than in the pages of Inside. Where Town was mystical and oftentimes lovely, Inside is brutal, dirty, and mean. Beyond its grit and muscle, however, lies an astute understanding of the inner workings of an individual who cannot find his place in the world. Inside is Harvey's most accomplised novel to date.
Blackstrap Hawco 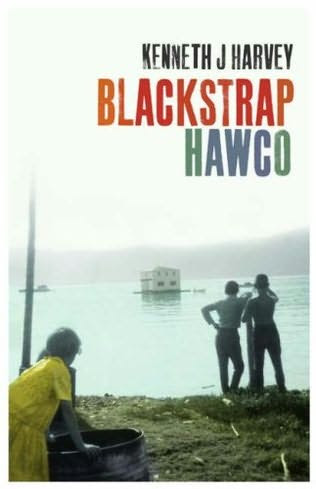 Harvey's magnum opus. None of his backlist can prepare a reader for the 800+ pages of Blackstrap. Vastly difficult, frustrating, epic and yet painfully intimate, Blackstrap is a punch-drunk fighter of a novel, always bobbing and weaving, exasperating at times, and utterly surprising. Where Inside was lean, Blackstrap is huge, yet both concern the struggle to find a place in the world.
Blackstrap Hawco (subtitled said to be about a Newfoundland Family) converns the family Hawco throughout the early years of Canadian existence and up into today. Told through various voices and styles (including several almost poetic interludes where the missing commas from Inside must have migrated to), Harvey spins a narrative of unparalleled complexity. Family myths become fact, facts become legend, and as Newfoundland is swept onto the Canadian stage, the struggle between traditional values and modern society finds itself embodied in the soul of Blackstrap Hawco.
Blackstrap is far and away Harvey's most impressive novel, and it is a testament that he holds sway over the reader even as his narratives contradict each other and the truth of the reality becomes suspect. While an imperfect and somewhat unwieldy beast - the seams and grout of this massive structure are clearly visible - Blackstrap holds the reader in thrall throughout its intersecting storylines. Again, Harvey works with the theme of the outside as represented by Newfoundland in its relation to Canada, but unlike the sterling work of fellow Newfoundland writers Wayne Johnston and Michael Winter, Harvey could never be accused of softening the edges of his resolutely bleak characters. There is little humour in Blackstrap, and its constant direness can become tiresome. But the overall effect is stunning.
I cannot adequately summarize the importance of Harvey to Canadian literature. I can only praise it, and hope to bring others to the fold. Kenneth J. Harvey is one of Canada's finest writers - show him some respect and read him.
Posted by Corey at Sunday, December 28, 2008

Being a bad Newfoundlander, I've yet to read one of Harvey's books (though I have at least read a short story of his that I quite enjoyed). Based on the premise, I want to start with The Town That Forgot How To Breathe. It sounds very Saramago-ish.

Nice post. I'm reading Blackstrap Hawco right now, and am dismayed that I hadn't heard of Harvey before this book.

You must have been great on the debate team in school--you've convinced me, though I think I'll put Harvey on hold until the 3rd Canadian Book Challenge...

I loved The Town that Forgot How to Breathe and I'm thinking I'll re-read it for the 3rd Canadian Book Challenge. I read one of his other novels that was so scary it was weeks before I re-emerged from under the bed, though.

He's not easy to find here in the UK, which is a real shame.