Today, the shelf monkey asks: "Who would win in a fight: zombies, pirates, or ninja?"

The answer? We all do.

The second answer? The monkey. No one beats the monkey. 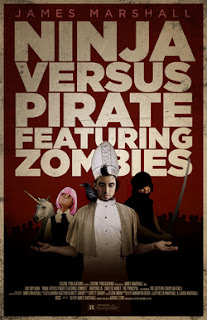 I look away from the TV and back to the road. I'm drunk-driving for safety, but to double up on safety, I'm driving a bulldozer. It isn't one of those puny little bulldozers you see toppling trees sometimes. No. It's an enormous mining bulldozer. It's the kind of bulldozer you'd use to push down a mountain. I find that when I get into an accident while driving a gigantic bulldozer, it doesn't really bother me. And huge bulldozers are also excellent for zombie outbreaks because there are always a bunch of abandoned cars and pickup trucks in your way. The driver's area of my bulldozer is encased in (pock-marked) bullet- and sound-proof glass, overlaid by a chain-link cage that locks in order to protect occupants (me) from the undead and the few living people who escape the Zombie Acceptance Test and fend for themselves in a post-apocalyptic wasteland.

I've made quite a fuss over ChiZine Press the last little while. The Canadian publisher has introduced me to the works of David Nickle, Gemma Files, Robert J. Wiersema, Tim Lebbon, Gord Zajac, Claude Lalumière, Tom Piccirilli, Craig Davidson, Simon Logan, Nicholas Kaufmann, Douglas Smith, and Michael Rowe. Combined, these authors make up most of the top books I've read over the past three years. The worst I've ever said about a ChiZine release is, "That was pretty darn good."

So I'm habitually inclined to trust the judgment of its editors when it comes to delivering fascinating genre fiction. I've got Gemma Files' third Hexslinger book on deck, as well as The Steel Seraglio and In the Mean Time.

But even if you take ChiZine out of the equation, quite frankly there was no way I was not going to be interested in a book titled Ninja Versus Pirate Featuring Zombies (hereinafter NVPFZ). It's got three of my favourite pop culture things right in the title: zombies, ninja, and versus (you put versus in a title, you're guaranteed my attention; I'm looking at you, Godzilla versus Mothra).

Whatever I was expecting, however — battles of enormous bloodshed, adventure on the high seas, stealth kills in the shadows, some amalgam of all three — I did not get it in NVPFZ. What I got was a good old-fashioned spin-your-head-around-twice mindfu@#. Even now, weeks later, I'm not precisely sure what to make of it; I only know that I had a rollicking good time.

Ostensibly, NVPFZ is the tale of Guy Boy Man, a character whose name now goes on my list of favourite literary names, a list including Billy Pilgrim, Major Major Major Major, and Hiro Protagonist. Guy Boy Man is an exceedingly rich sixteen-year-old who sees himself as a pirate (although he wears the Pope's hat), trying to survive what appears to be a hellscape of a school populated by zombies with the help of his best friend Sweetie Honey, an African-American ninja. In addition to battling said zombies and his arch-nemesis The Principal with the help of a cadre of extremely attractive women, Guy Boy Man has fallen for a precocious pink-haired girl names Baby Doll15. Alas, he cannot proclaim his love for her, for if he does, he shall lose his trillions of dollars; so say the centaur from Fairyland who bequeathed him the money, a tidy sum which may have caused the collapse of the American financial system.