Description (from the publisher)

Mickey Dupree is one of the most successful criminal attorneys in upstate New York. The upside of being Mickey: he has never lost a capital murder case. The downside: Mickey has a lot of enemies, and one of them has just driven the shaft of a golf club through his heart, leaving him dead in a sand trap at his exclusive country club.

The cops, led by a gung ho but dim-witted detective named Joe Brady, focus their attentions on Virgil Cain. Just two weeks earlier, Virgil told a crowded bar that “somebody ought to blow Mickey’s head off,” after the slippery lawyer earned an acquittal for Alan Comstock, the man accused of murdering Virgil’s wife. Comstock, a legendary record producer, gun nut, and certifiable lunatic, has returned to his estate, where he lives with his wife, the long-suffering Jane.

Virgil is convinced that the fix is in when Brady immediately throws him into jail with no investigation. So Virgil escapes from custody, determined to find Mickey’s killer himself. His only ally is the smart and sexy Claire Marchand, a detective who is at least willing to consider that Virgil may be telling the truth. Now it’s up to Virgil to prove his innocence, and to do that he needs to find the killer. Before the killer finds him.

What the Tiny Monkey thinks

I think it's still too early to proclaim Brad Smith as Canada's answer to Elmore Leonard; after all, Smith has written only six books, and Leonard has umpteen-million novels and stories behind him. But based on Red Means Run, combined with his past output, it's clear that Smith knows his way around the genre, and has a hell of a lot of fun navigating the terrain. 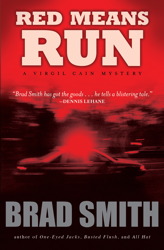 As with Leonard (and the best crime practitioners such as George Pelecanos and Joe R. Lansdale [a genius who straddles genres with ease, and whose Hap Collins and Leonard Pine series is required reading]), Smith understands that a mystery/thriller is really only as good as its characters. From his debut One-Eyed Jacks, Smith has excelled at crafting entertaining low-lifes and underbelly dwellers, and Red Means Run finds him in fine form. Virgil is the crafty sort of protagonist that best propel outlandish plot lines, a fundamentally honest, wryly funny man who is well-nigh incapable of just sitting by and waiting for results. Claire is also nicely nuanced, and while the sexual tension between her and Virgil is never in doubt (on a side note, the cop/criminal sex trope is really played out for me), Smith keeps the banter light even as the plot bobs and weaves its way through murder and mayhem. There's nothing particularly innovative in Smith's approach, but he has the goods to move the story like a motherfu@#er. Red Means Run is pure pleasure to read.

TINY MONKEY REALLY LIKES
Posted by Corey at Tuesday, May 08, 2012

I liked it too. It was fun.