Monkey droppings - God Says No by James Hannaham: "I told her what she wanted to hear in the words everybody used like shorthand."

Today, the monkey discovers that all people have faults, there are no easy answers, we're all uniquely human, etcetera, etcetera.
Whole lotta sorts on this planet. Make a'da world go round.
God Says No 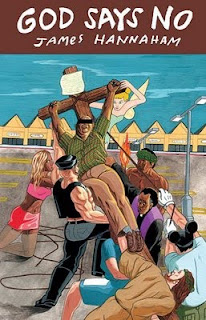 Even after all the guy stuff, I still believed that homosexuals were evil people who wished eternal hellfire by defying God's law, as stated in Leviticus. Homosexuality was punishable by death. Take a step toward it and Christ, the Bible, and your family would condemn you. If one of the sex viruses didn't kill you, loneliness would.

In the early months of 2006, Ted Haggard was an evangelist on the rise. His congregation neared 14,000 in number, and he was promoted as one of the great charismatic leaders on the American Christian landscape. He also espoused many of the fundamental tenets of the far right wing, condemning homosexuality and gay marriage.

Then, in November of that year, Haggard was removed from his post as details on his visits to a male prostitute came to light. Other leaders were quick to deny that Haggard had ever been a real leader with any power, and he was quickly shuffled off for heterosexual counseling, and was pronounced 'cured' of homosexuality some weeks later.

At the time, I won't deny an overwhelming rush of shameful joy, watching a man who preached love while practicing hate brought down by the very 'sins' he vociferously declaimed against. But a small part of me was sad for Haggard; he was a man brought up to loathe those things in himself that others found repugnant, and was filled with self-hatred that expressed itself in the condemnation of others for his own perceived faults. If had grown up with a family, in a culture, that allowed him the freedom and understanding to find his own way, who knows how things would have turned out?

I bring up this example as way of introduction to James Hannaham's often remarkable debut novel God Says No. Covering many of the same themes as Haggard's life, Hannaham provides a sometimes hilarious, always insightful, and surprisingly even-handed look at a man struggling with his innate desires.

Gary Gray is a young black Christian man with a new wife, a good job, and a deep abiding evangelical belief in the teachings of Jesus Christ. He is also a homosexual, and has known that he has no attraction to women from a very early age. Being brought up in an evangelical household with a father who occasionally beats him, Gary seeks refuge in the Bible, hoping that 'getting saved' and becoming a devout Christian will somehow erase his yearnings from his soul.

The way our classmates talked about it, getting saved came naturally, like a sneeze. Jesus would illuminate your soul and touch your heart until it blew like a volcano into ecstasy and new life. Color and peace flood your world...Salvation was like trying to think of a name you couldn't remember. It would come faster if you didn't force it. Maybe getting saved and liking women happened in the same way. Maybe if I let go and let God in, He'd mend everything.

Unfortunately (from his point of view), leading a deeply Christian life, getting married and having a child does not quell his desires, although he struggles mightily to keep that side of him hidden from public view. He rationalizes his warring natures through a combination of self-loathing, religious teachings, and specious reasoning: "I wasn't a homosexual, I just had same-sex attractions, and I did guy stuff sometimes, but I could sort of perform with my wife sometimes now, so that was that." But soon, Gary finds that denial is not an option, and he decides to travel a new path for awhile to try and rid his tendencies from his body once and for all.

What is most surprising about Hannaham's tale is how superbly he handles all sides of the issue. Gary is absolutely sincere in his desire to change that which can never be, although it is obvious that he's happiest and most 'himself' when he accepts his nature. When he enters a program to 'remove' his homosexuality, a lesser writer would likely use the opportunity to condemn such actions as ludicrous and hateful. But Gary and his teachers are fundamentally good people, led by firm beliefs that what they do is right. This is not an attack on Christianity, but a dissection of people who take the Bible very seriously at the expense of their own unique individualities. There are no cheap shots, no laughs at the expense of bigotry. Hannaham's tale slowly expands itself into an exploration of how we all lie to ourselves to make ourselves feel better, and how we all alter our behaviour to suit the beliefs of others. Gary and his fellow students at the ministry are devout in their belief that they can change an innate portion of their being to satisfy others, even though the entire notion is inherently laughable. The rest of their lives will be spent in hollow denial of themselves, if the treatment actually worked: "Dr. Soffione's treatment didn't offer a 100 percent cure. From the way Bill and Gay spoke about it, nobody could. Did Christ really want that for us? Would we have to spend the rest of our lives counting the seconds to make sure our hugs didn't go into overtime?"

Gary is, as befits the dual nature of his personality, quite a complicated individual, and not the most likable of protagonists. His actions are alternately noble, misguided, selfish, pious, and deluded, and it is sometimes difficult to sympathize with his dilemma. But who ever said a protagonist had to be likable? Hannaham pulls off a far more impressive feat; he makes Gary imminently relatable. We may not agree with his decisions, but we see in him all the contradictions we find in ourselves. Hannaham may give other characters short shrift (Gary's wife Annie exists more as an object to test Gary's resolve than a full character), but it's not their story anyway. It's Gary's life, in all its laughter and tragedy. He's a universal character, comic, fallible, and deeply human.

In the end, Gary's tale does not resolve itself, except in the sense that life continues no matter what choices we make. But the finale of God Says No is hopeful, sentimental yet never cloying. Gary may not have found himself by the end, but he may have found a way to live with himself.

I might have passed on this had I not read this review. Sounds very interesting. And considering other suggestions that I have taken from you in the past and how they turned out, I will have to find a copy of this.