Monkey droppings - The Blondes - Just a trim, please. Wait, put down that knife!

The monkey decides to lighten up his doldrums and make himself feel pretty.

Ever seen a monkey with a perm? Not good. Like one of those elderly C-list stars who've had way too much plastic surgery yet somehow feel they're presentable enough to parade down Rodeo Drive looking to buy purses that cost more than you make in a year.

You know the ones I mean. 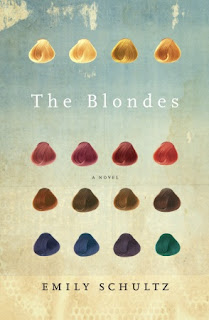 Personally, I've always preferred brunettes, or redheads. Just a matter of personal preference. But if the events in Emily Schultz's The Blondes ever come true, I'm going to be very happy I didn't fall hard for a dame with golden locks.

Because Blondes is every fashionista's worst nightmare come true. A mysterious virus begins infecting women with blonde hair (even those who've gained blondedom through dyeing), turning them into violent mindless people who attack at random, and kill without a second thought. Kind of like a zombie novel with split ends. Ba-zing!

Schultz being Schultz, however — which means, being the author of Joyland and Heaven is Small, that she is a damned talented individual — there is far greater depth to The Blondes than the surface would indicate (see what I did there?). As much a satire of society's obsession with looks as it is a Outbreak-like contagion thriller, Schultz expertly entwines a speculative fiction premise with social commentary, making Blondes akin to Dawn of the Dreadfully Good Looking. Ka-pow!

Our hero, Hazel Hayes, is a young grad student working on a thesis on the media obsession and transformations of standards of female beauty. She is also new to New York, newly pregnant with the child of her (married) thesis advisor, and understandably freaked out a little. Her bad luck, then, to be at what appears to be ground zero of the new epidemic, soon dubbed "the blonde fury" by media wags. When a woman randomly attacks a young girl, Hazel tries to help, but find that her fellow citizens aren't the type to rush to anyone's aid:


Then cellphones came out into palms, and people punched into them, some reticently, some frantically. The punching continued for what seemed like forever, but no one lifted a device to an ear. Lack of reception. A couple of the high school kids didn't even bother trying to phone; instead, they held up their devices and calmly filmed.

Such inaction is a major plot device here, the idea that the 'other' (government, the CDC, etc) knows best, so we shouldn't get involved. Leave it to the professionals. Which the world does, and Hazel soon discovers herself in a world of rampant security, hysterical paranoia, and increased insanity (the idea that men will pay scads of money to have sex with infected blondes being one of the more memorable/disturbing).

Corollary to this epidemic scenario is Hazel's own crisis of begin pregnant, alone, and when the borders increase security, suddenly cut off from family. Being a redhead, she is close enough to blonde to be a cause for suspicion, and while I do not wish to give away spoilers, suffice to say that North America goes down a very dark path indeed, one that has all-too-obvious parallels to historical and present events.

Yet being as Hazel's work is in female body image, the bulk of the subtext is a concise examination of women as they are, as they are seen, and as they regard themselves. Hazel begins her tale with the phrase, "Women have stupid dreams," and from there Schultz unearths an entire world in thrall to appearance rather than substance. Baldness becomes chic, and wigs become de rigueur. Interestingly, while Hazel goes on about the myriad of ways women look to attack each other (not physically like the infected, more of a passive-aggressive taunt-her-into-an-eating-disorder sort of way), it's her friendships with women that allow her to make it through to the (hopefully) other side. In a world without hope, Schultz finds the key to survival, and it is others.

Blondes gives us not only a fine novel, but a fine author completely coming into her own. Schultz deserves all the accolades she gets.

not on topic, but nonetheless, do you have a release date for Husk in the antipodes? O is it best to just but onlike via booko?

Alos, is there a better way for punters to but books where more of the price [aid goes to the author? I am thinking this because, for example, getting the new Amanda Palmer album of bandcamp gets more money into ther pocket than itunes (shudder).
Cheers from Melbourne

off topic, when will HUSK make it into the antipodean market? Or should i buy online via booko?

I'm not sure. I know it will be made available there, but your best bet is to check with a bookseller to see if they can order a copy in. I doubt it'll be on the shelves.