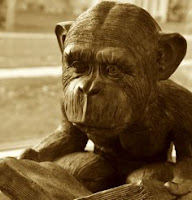 The monkey has no jokes today.

"You do the math. If you're a bad guy, you don't have a job, no bank account, no apartment. You live in hotels, move around a lot, eat in restaurants. But not expensive hotels because you might be noticed in those and you'll need ID . . . You need maybe sixty bucks a day for food and a little more than that for the hotel and maybe another thirty to fifty for incidentals . . . That's about one-eighty each day. Life gets stressful, though, so you start doing a little something to deal with the stress. If you drink or do grass to level you out, that's another twenty or forty per day. But you can't be level all the time, you might have to move fast so that means keeping cocaine or crank or meth handy, and that's another fifty to one hundred a day and that's if you don't have friends. That's a total of about three Cs per day. Every day. That means two grand one per week, or eight grand four per month, and that means one hundred and nine thousand, two hundred dollars per year. Period."

Michael Van Rooy was a Winnipeg author who passed away far too soon in January 2011. Michael was an author much beloved in the Winnipeg community; his first novel won the Eileen McTavish Sykes Award for Best First Book, he won the 2009 John Hirsch Award for most promising writer, he worked with emerging writers, he served on several Arts boards and was named one of Winnipeg's arts ambassadors for its 2010 Cultural Capital of Canada campaign.

I never got a chance to get to know Michael; we were Facebook 'friends' brought together through mutual interests, and only last December did I have the opportunity to meet Michael in person. He was signing copies of his books at a Coles bookstore in Winnipeg, and I was fortuitously visiting my family for the holidays. I stopped by to do the old one author to another appreciation bit, and we chatted for twenty minutes or so. I found Michael to be a warm and approachable sort, and I thought to myself that were I to ever return to Winnipeg for a long-term stay, Michael would be a person I would very much enjoy hanging out with.

Even in that brief space of time, I could tell that Michael was a man passionate about his profession. He gave me a few pointers on how to better pitch a few novelists I represent to Thin Air, the Winnipeg International Writers' Festival. We discussed our mutual work, my still-in-editing second novel and his ongoing series of crime novels, which had just been picked up for release in the States by Minotaur Books. I left with signed copies of his first two novels and a promise to keep in touch.

And the books sat on my shelves for a brief time while I attended to the many other things that takes up the daily routines of life. And then Michael suddenly passed away, at the age of forty-two, while on tour for his latest release A Criminal to Remember.

I didn't know how to feel about it all. I still don't. We were not close in any way, but I keenly felt the loss of an author whom it appeared was on the cusp of bigger things. And so I honoured his memory in the only way I could; I sat down with his first novel An Ordinary Decent Criminal and began to read.

And now, with two books read and only one left to purchase, his loss is even more personal. Michael Van Rooy was a real talent, his novels bursting with wit, bravado, and style. That we get only three Monty Haaviko novels to remember him by is, quite frankly, not nearly enough, and not fair.

Both An Ordinary Decent Criminal and Your Friendly Neighbourhood Criminal concern the ongoing exploits of Montgomery "Monty" Haaviko, an ex-con with a seriously cruel past that Van Rooy thankfully keeps all but hidden. As Decent Criminal opens, Monty has changed his name and moved his family to Winnipeg, Manitoba, hoping to give them all a fresh start.

Doubtful. From the opening sentence, "I had a gun I didn't want to use," it is clear that Monty may yearn for the quiet life, but the quiet life doesn't want him. In its first four pages, Monty has killed three intruders to his new home, and Van Rooy has provided not only an attention-grabbing start but the groundwork for a defiantly appealing hero/anti-hero. Monty may view himself as a simple ODC ("ordinary decent criminal"), but as Van Rooy's story revs up, it becomes abundantly clear that Monty, no matter his current intentions, was never ordinary.

Throughout Decent Criminal's narrative, we see that the odds are stacked up against him at every turn. The three men he killed had connections to a local crime figure who has a personal stake in seeing Monty punished for defending himself and his family. Detective Sergeant Enzio Walsh has figured out Monty's past, and has made it his personal vendetta to destroy Monty by any means necessary. And Monty's new neighbourhood is hardly accepting of Monty and his family, particularly after Walsh begins a not so discreet campaign of slander against him. But Monty is not alone: his wife Claire is supportive, nurturing, but realistic about erasing Monty's past; his son Fred is still in diapers; and his dog Renfield is, well, a dog. Yet without them, Monty would be another lost soul

No reader would blame Monty for retaliation, and part of the many delights of An Ordinary Decent Criminal is Monty's ingenious manner of getting even. Monty may come across as a kind and accepting person, but hidden deep within his soul are immense reservoirs of cruelty and slyness that would make Mickey Spillane blush. His American publisher hypes Monty as akin to the Jack Reacher novels of Lee Child, of which I am not familiar. For me, Monty is part MacGyver and part Burke, the one-name hero of Andrew Vachss' series of crime thrillers. But where Burke is grim, humourless, and skirting parody at all times (a line Vachss frequently crossed as the series grew more and more ludicrous, albeit entertainingly so), Monty has a way of finding the lighter side of things, even when he's being beaten into unconsciousness. Van Rooy's novel would not work half as well if Monty didn't have real charisma to help make some of the things he does more palatable to the reader. Because when Monty gets serious, he gets mean, and Van Rooy's balancing act of the two sides of Haaviko is a remarkable feat of writing, particularly when Monty gets very, very angry:

He looked hard and drug-fueled rage opened and closed his mouth until I pressed the barrel of the Colt .22 into his eye and he backed up, and then pressed some more until he backed and finally stopped when he hit the institutional grey wall.

"Stay out of my way or you die. Stay away from my family or you die. If you interfere with me, you die. You try to do anything that affects me personally in even the smallest way and you die."

With each word I jabbed a little harder into Robillard's eye and then I stopped and headed up the stairs. At the top I booked it down the alley, stopping for a second to open the hood and tear a handful of wires loose from Sandra's car. A few alleys over, I wiped down the three guns on a piece of canvas sticking out of a garbage can and dropped them one at a time into trash cans and down sewer gratings.

Your Friendly Neighbourhood Criminal finds Monty in a slightly better, if offbeat, place. His wife Claire has found employment as a realtor, leaving Monty to run a daycare centre for local children in his home. Monty is more realistic now about finding real work on a legal level, but he figures that some laws can be bent for a greater good. And as must happen in such novels, if the hero won't go to trouble, trouble must come to the hero. In rapid succession, Monty finds a lucrative side career helping refugees cross into Canada, falls afoul of a criminal figure with eyes on using his unique route past border guards for more criminal-oriented enterprises, and comes back into contact with Smiley Wiebe, a former cellmate who wants instruction on going straight.

It is common knowledge that Michael did time in prison himself for armed robbery, a crime he always denied. I cannot attest to the truth of it, but his experiences undoubtedly helped infuse his writings with a tone of authenticity often lacking in similar tomes. Van Rooy has an eye for detail, both in the minute elements that go into Monty's plans and in the viciousness of his fight and actions sequences that, when they come, are clear, visceral, and riveting. Whether they are completely factual or not is not something I can prove; however, they feel real, which for a crime writer is high praise.

Beyond the authenticity of his research, in only two novels Michael Van Rooy proved himself as a great creator of character. Beyond Monty himself, the various people who populate the underbelly of Van Rooy's Winnipeg - and as an aside, a gritty crime novel in Winnipeg? Awesome. - are some vivid and intense personages indeed. His criminals are memorable, sketched somewhat broadly yet always with enough style to give them some personality. Only Claire remains somewhat a cypher, a woman of grit and substance who keeps Monty focused on his family even as he hangs out with decidedly unpleasant denizens of his past. Claire is an idealized character, too perfect by half for the life Monty lives, but there is enough of a character present to hint that there might once have been bigger plans for revealing her past in future novels.

Such rough patches aside, Michael Van Rooy was an author whose work, already accomplished, hinted at a career that was poised to take him to the next level of crime writers. His first two novels alternate between weirdly humourous and punishingly grim, mixing pulp with class, clearly marking his talent as approaching those who populate the higher echelons on the genre such as Vachss, Elmore Leonard, Dennis Lehane, and George Pelecanos. The loss of Michael Van Rooy is a huge blow, both to the writing community to which he contributed so much of his time and energy, and to Canadian Literature.

Thanks Corey for this. I didn't know Michael well but he was omnipresent at literary things in Winnipeg so I ran across him a few times. The first time I bought An Ordinary Decent Criminal. When I read it I wrote to Michael on Facebook to ask if there was a second book on the way. Michael sent me a friend request and we've posted things back and forth. I bought his second book to celebrate his birthday in 2009 but I hadn't read it yet when I saw the notice of his death. I was looking forward to discussing it with him. Now I won't be able to. It's a big loss to all of us who care about good writing.