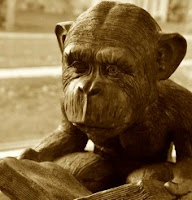 The lonely Monkey, seeking companionship away from humanity, reads some Canadian novels about talkative animals.

Seriously, I must have a jones for anthropomorphism. Several of my favourite novels have animals (and objects) exhibiting human characteristics - The Bear Went Over the Mountain (bear), Firmin (rat), Winkie (teddy bear), Skinny Legs and All (can of beans, sock, painted stick, and spoon). On the tellybox, current favourite characters include Tim (bear) from The Cleveland Show and Brian (dog) from Family Guy. Don't know what it means.

I'm also the guy who loses emotional control when an animal bites it in a movie, but chows down on seconds of popcorn during examples of gratuitous human violence.

So, now you know something about me.

My dad used to say I was a chalant. A lost positive. Nonchalance, he said, is indifferent to mystery. Nonchalant is one of the worst things a person can be. You hang on to your chalance.

So, I hears about this book, see? About a lopsided young woman and a verbose pet, and I thinks to myself, I thinks "Damned if that doesn't sound a lot like Erika Ritter's novel The Hidden Life of Humans."

And then I shake my head, and I can speak clearly and concisely again. And I find the book. And I am blown away.

The book is Come, Thou Tortoise, a critical Canadian darling that has already won author Jessica Grant a few awards, most recently the Amazon.ca First Novel Award. Like Ritter's work, it alternates narration between an odd young woman and her pet; Ritter used a dog, whereas Grant employs a tortoise. Unlike The Hidden Life of Humans, with its mundane writing and medium sitcom-level humour (think Two and a Half Men, but in print, and with a canine in place of Charlie Sheen), Come, Thou Tortoise is an affecting and lyrical piece of work.

The odd woman, in thankfully Grant's only nod to overt preciousness, is Audrey 'Oddly' Flowers. Oddly is competent, intelligent, and yet, well, odd. So very odd. In the first chapter, thinking him to be a terrorist, she disarms an Air Marshall and barricades herself in a plane restroom. Yeah, she's odd.

Oddly has been living in the U.S. for awhile, but is returning home to Newfoundland to visit her ailing father. After her run-in with the Air Marshall, she boards a flight to home, a plane laden with Newfoundlanders. "The sound of Newfoundlanders on a plane: If sarcasm were generous, that is the sound."

Oddly leaves with friends her beloved Winnifred, a tortoise which is her last connection to a past lover. Winnifred, as befits an ancient soul, has a more sedate yet no less unique opinion of the world around her.

I am a pretty powerful tortoise. I walked across the desert once, about a century ago. All the way from Texas. Slow like the camel in Lawrence of Arabia...All along the way I passed overturned tortoise shells, picked clean by birds. Pretty discouraging. But I kept going. Why. Because I had heard stories about trees a hundred feet tall. I had heard about rain. And why should a tortoise not have rain in her life.

As Oddly comes to grips with her new obligations (her father, a scientist, actually passed away), Grant weaves a strange, comic novel that is as moving as it is funny. It says a lot that I find myself playing certain scenes over in my head weeks later, wondering at how Grant found such new ways to view the world.

Even as Oddly goes completely off the rails, in a loose plot that contains conspiracy theories, missing uncles, offbeat wordplay, and strangely eternal mice, Grant keeps the plot running with effortless efficiency, somehow rooting its absurdities in reality. There is very little in the way of overt wackiness, and Grant's writing never becomes irritatingly coy or overbearing. Oddly and Winnifred are winning characters (Winnifred is given far less to do, but that's for the best), and Grant populates her pages with all sorts of endearing characters. Especially Uncle Thoby, a relative from England, holder of the family secrets and saddled with one arm longer than the other.

Come, Thou Tortoise, with echoes of Vonnegut by way of the gentler humour of Miram Toews, is strange. So strange. And like Oddly, so very, very lovable.

Not the novel Beatrice & Virgil; that I get, and will return to it shortly. What befuddles me is the immense amount of hatred that has been levelled toward Yann Martel's follow-up to Life of Pi.

The reviews so far have varied wildly, from praise to admiration to dislike, and then to loathing of a most disturbing sort. There is one particular blogger, a popular (and quite smart) writer, who proclaimed Beatrice & Virgil, amidst a diatribe so hyperbolic and obscenity-laden it completely loses focus, to be the worst novel of the decade. I won't bother linking to the post: enough has been written about it that it's not hard to find, and quite frankly, the post is so ridiculously over-the-top that it calls into question (for me) everything he has previously written. I'm not unfamiliar with exhibiting an arguably unreasonable hatred for a novel (see this James Patterson post as example, as well as my upcoming review of Chuck Palahniuk's latest), but if this gent thinks Beatrice & Virgil is the worst novel of the decade, he doesn't read near enough.

B&V concerns Henry, a famous author taking a sabbatical from writing. His previous novel was a major hit, but his follow-up work - a flipbook that would contain a story and an essay, both concerning a Holocaust - has been turned down by his publisher as lacking in commercial appeal. Henry moves with his wife to a new country, where he does his best to ignore his storytelling urge. But a fateful meeting with a strange old taxidermist reignites his passion.

Make no mistake, this is no Life of Pi. Instead of a fable, Martel works within the genre of direct allegory, as his author struggles with the dilemma of presenting the Holocaust within the realm of art.

No such poetic license was taken with - or given to - the Holocaust. That terrifying event was overwhelmingly represented by a single school: historical realism. The story, always the same story, was always framed by the same dates, set in the same places, featuring the same cast of characters...And so Henry came to wonder: why this suspicion of the imagination, why the resistance to artful metaphor?

The taxidermist fuels Henry's imagination through an absurdist play the old man is writing, a Beckett-like fable involving Beatrice, a donkey, and Virgil, a howler monkey. As Henry learns more of the play, he becomes obsessed with discovering a way to encapsulate the horrors of the Holocaust within his art.

This is not an easy subject, but Martel's take on it is artful and airy. Almost too airy; unlike Life of Pi, where the fantastic elements were rooted in a devastatingly believable narrator, none of Martel's characters in B&V rise about the level of being a tool to the parable. Martel is not so much telling a story as he is expressing an opinion, and this does the work a disservice.

Okay, so, it's not Life of Pi (a novel with its own fair share of detractors, although I do not count myself among them - I love the book, practically unconditionally). Martel lets his ideas on allegory overwhelm the potential of his narrative. But so what? The book is eminently readable, literate, and poetic, and leaves the reader filled with questions that demand a reasoned response. How to present unimaginable horrors within an artistic context is a puzzle that may never be answered, but must be continually addressed. So why the utter animosity? If you expected Life of Pi 2, sure, you'll be disappointed, but the deluge of hatred that has spewed forth is all out of proportion to the work itself. If you want to complain about poor allegories, go read some Paulo Coelho (talk about an unreasonable hatred).

Myself, I'll take Beatrice & Virgil for what it is, an imperfect quest to solve an impossible question. It's not perfect, but it made me ponder philosophical and artistic theories, which puts it head, shoulders, waist, and knees above anything Coelho ever wrote.

Man, and I just met her yesterday, i could have asked. For me, it means a sort of sarcastic warmth, a genetic sarcasm that is light and can't mask the heart underneath. I don't know, I just like the sentence.

Although I am not a Newfoundlander, I think Grant means that they are gently insightful rather than caustic with their satire.

I loved your review Corey.
Thanks.