A Small and Remarkable Life by Nick DiChario - a review 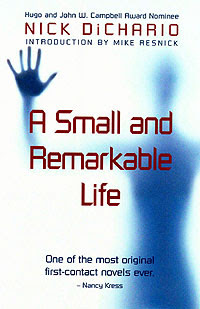 Theodore Sturgeon is one of the great unsung heroes of science-fiction, a genius of style and character, and a true visionary when it came to intricate plotlines that were completely unpredictable yet completely, devastatingly logical. Sadly, while his name is still held in high esteem by the literati of the sci-fi genre, he has never truly risen above the level of cult author, largely ignored while his contemporaries and imitators attain a level of popularity denied to him. We hear of Philip K. Dick, of Frank Herbert, of Clarke, Asimov, Bradbury, Zelazny, and Delany, yet Sturgeon is relegated to the sidelines, more often known as the inspiration for Vonnegut’s famed character Kilgore Trout (himself a failed science-fiction author), or as the original writer for the famed Star Trek episode, “Amok Time.”

Sturgeon’s true flair was in plotting, excelling in narrative’s which always keep the reader in a state of heightened suspense. Take his novel More than Human (his acknowledged masterpiece), wherein six strange and damaged individuals discover that they each form a part of a whole, a “blesh” organism which takes on the next step of human evolution, the “homo gestalt.” To Marry Medusa is a brilliant exploration into another evolutionary concept, as humanity becomes infected by a hive mind, and learns to function and defeat the alien host through its collective strength. Sturgeon had a definite knack for revealing the many facets of humanity through stories of alien contact that spurned the popularity of their shoot-‘em-up alien invasion space opera cousins (a la Independence Day), and rose to the level of art. But the genre he wrote in denied his fame, as for the most part people still reject science-fiction as being ‘popular,’ and therefore not literature.

There, of course, have been many, many examples since Sturgeon passed away of excellent writers consigned to relative obscurity because of their chosen literary field. Nick DiChario may suffer the same problem; it’s far too early in his career to tell. But let us hope he achieves more: based on his deeply surprising first novel A Small and Remarkable Life, we may have discovered the 21st century Sturgeon.

Taking the form of a ‘first-contact’ novel (i.e. a story based on the presumption of Earth’s first contact with an alien life form), DiChario’s tale bears all the hallmarks of the classic ‘fish out of water’ scenario so beloved in science-fiction: an alien, trapped on Earth, must learn to adapt and survive. Yet as in Sturgeon’s best, DiChario subtly subverts the concept, taking the reader down unexpected paths.

Setting his narrative in the mid-19th century, DiChario intriguingly lays out the story of Tink Puddah, an unusual bluish-hued individual that most people refer to as “the foreigner.” Tink is the mysterious progeny of Nif and Ru, two aliens from “Wetspace” who have decided to adapt themselves to life on earth:

Right from the start, DiChario propels the story through startling imagery that pays homage to the tenets of the genre while at the same time raising the bar.

Unfortunately, Nif and Ru fall to misfortune as Tink’s body is adjusting itself to a human shape. Their motives for coming to Earth are never explained, nor should they be, as Tink’s tale would be forever spoiled from too much back-story. DiChario presents Tink’s life in two ways, weaving a standard chronological narrative of his life with the tale of Jacob Peirsol, a preacher who presides over Tink’s funeral (it gives nothing away to say that Tink dies, as the story begins with his memorial service). Jacob, like Tink, has been searching for meaning in his life, and his collision with Tink alters his lifepath irrevocably.

By keeping Tink confused as to his past, thereby becoming a blank slate on which an existence on Earth can imprint its various glories and cruelties, DiChario manages the not-inconsiderable feat of having Tink function as both character and parable. He truly becomes the ‘good Samaritan,’ traveling the land, dispensing kind acts for no compensation, yet persecuted for both his outward appearance and a case of mistaken identity. There are strong parallels to the messiah myth, but also present is a strong homage to Mary Shelley’s Frankenstein (Tink’s odyssey as an incompletely-formed human is directly analogous to Shelley’s Monster wandering alone and unloved through the world), as well as Robert Heinlein’s Stranger in a Strange Land – although how any modern Christ analogy in science-fiction could not but harken to Heinlein’s revolutionary sci-fi parable is hard to fathom.

Interestingly, despite the abundance of evil in Tink’s world, the true ‘villain’ of the piece, Jacob, is hardly a villain at all, in the traditional sense. His only crime is one of pride, as he cannot comprehend Tink’s unwillingness to consider the possibility of God;

“Jacob had always believed Tink Puddah nothing more than a heathenish savage and feared for his misguided soul. And, as any preacher would have done, he harbored a secret resentment for someone who could turn so easily from the Word of the Savior, Lord Jesus Christ, to a belief in…well…nothing.”

It does a disservice to DiChario’s accomplishment to lump it in with the usual assortment of ‘aliens lost on Earth’ stories such as the cinematic adventures of E.T. and Starman. A Small and Remarkable Life does perform the archetypal function of holding up a mirror to the acts of mankind, reflecting all their flaws and triumphs, but DiChario’s talent for pathos (and his skill at creating a colonial world that doesn’t feel stale or trite) ensures that A Small and Remarkable Life holds itself tall over its competitors, a small and remarkable novel.
Posted by Corey at Wednesday, February 07, 2007

Hey, no prob. I'm only sorry I couldn't make your talk in Winnipeg.